I’ve been meaning to write about the Princess Cake at Gayle’s in Capitola, down in Santa Cruz, for as long as we’ve had our Santa Cruz food blog.  This year, my family surprised me with the Princess Cake on my birthday and so I finally got a photograph of it with my new lens at 11:30pm at night before we dove into it.
The history of the Princess Cake is that it is a traditional Swedish Cake created in the 1930’s (or as they say in Sweden, Prinsesstårta OR Prinsess Tårta).  In Sweden they serve this cake for celebrations such as birthdays and graduations, just not on Christmas. You can buy it frozen as well and the brand below is suggested (check out Ikea to see if they have it in your area).
I’ve read that Schuberts Bakery in San Francisco also makes a good Swedish Princess cake if you aren’t close to Santa Cruz, CA. 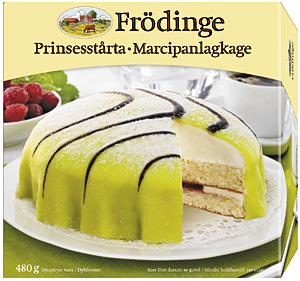 This site uses Akismet to reduce spam. Learn how your comment data is processed.

Wine without Food? … Americans Developing a Wine Culture of our Own
Tamarindo: Oakland